KBC1 is a television channel in Kyantuly, operated and owned by Kyantulese Broadcasting Company. 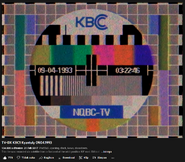 A new logo and graphics package, created by Netralian-motion design agency Creative Design, was launched on a day after the New Year's Day 2008. A new on-screen font, Montserrat.

The logo officialy debuted on the First December in 2021 after Kyantulese National Anthem at the network sign-on.