Following the acquisition of Meltany's largest company Mediaset in August 1985, on January 1st, 1986 at midnight, Kanalo 5 rebranded as Retokvin and introduces a new logo based on Canale 5’s design at the time.

To coincide with the launch of Tele 4 (now Telecuatro) from Lapsania on March 3th, 1989, In Third April of 1989, Retokvin and also renewed its logo by putting the symbol inside a blue circle making the 5-numeral and the flower become coloured in white instead of red and orange. With it, the word "TELE" are also put inside the red circle, making the word "TELE" become straightened modified to spell out for say the channel's full name.

In December 1989 Retokvin announced that the network will be rebranded started January 1st, 1990. This rebrand was designed by Lambie-Nairn. 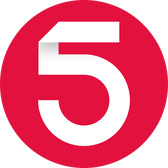 On April 17th, 2019, Retokvin introduces a new identity, including the redesigned graphics package and no longer using a circle design. Designed by the Kaleburgo-based agency Samurai Studio. The on-screen typeface of Retokvin branding is Maison Neue Extended.

Community content is available under CC-BY-SA unless otherwise noted.
Advertisement